A child raking a sandbox next to his nanny 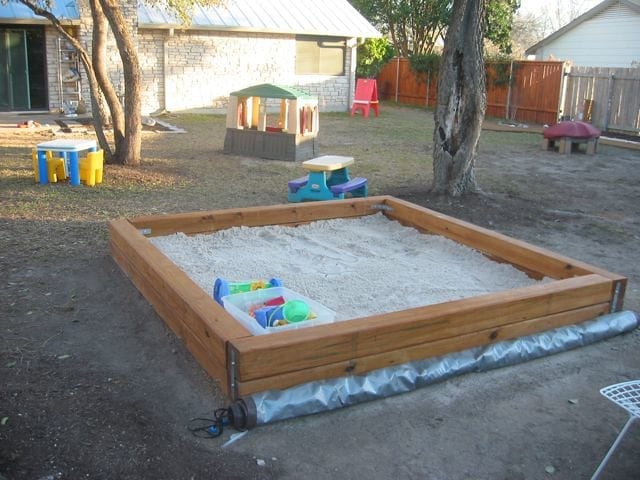 The sun was just a meagre glow in the horizon and the shadows of the surrounding trees stretched long and thin across the park to graze the edges of the sandbox. While it would take a while for the muggy day to turn frosty the cool wind blowing across the quiet well-cut glass promised a radical shift in temperature when the night set in.

“Nanny, is it nearly time to go home yet?” came the whine of a child who has asked the question so many times before that they have perfected the petulant note.

“Not yet, deary,” came the calm warm tones “but not long now, I promise.”

The little boy was surrounded by the various colourful toys, proudly displayed and newly bought, a banana yellow excavator truck, a bright red bucket with a multitude of primary colour work tools surrounding it like an explosion. Currently, the boy had a highlighter-green plastic rake and was carefully carving long sets of straight lines to the side of the only other figure in the park.

He squinted up at the figure towering over him in the waning light.

“You’ve been saying that for hours!”
“I know dear,” the voice cooed “but it shouldn’t be much longer now.”
“Until what?!”
“Until everyone at home is processed.”

A long moment of silence in the park.

The child shuffled on the sand tracing patterns this way and that. Taking his time to think over what he was about to say.

The figure turned its head to look down at the boy.

“That’s right Deary, we all get to live for as long as we want.” the voice cooed.
“Just like you nanny?”
“Just like me.”
“So..” a little pause “that’s good right? I mean, why did my parents get so upset this morning…”
“Because they didn’t understand yet, Deary.”

The little head bobbed up and down before letting out a little sob.

“They said so many mean things to you Nanny,” the little shoulders shook, “and they wouldn’t even look at me. I don’t get it, what did I do wrong Nanny.”

Distorted sobbing filled the park from the traumatised child.

“Ohh Deary,” the large form swept down and cradled the little one in its arms. “don’t be sad, no tears my dear, your parents ‘love’ you and they’ll be like new people when we get home.”

The last rays of light catching the metallic frame of her face.

This site uses Akismet to reduce spam. Learn how your comment data is processed.