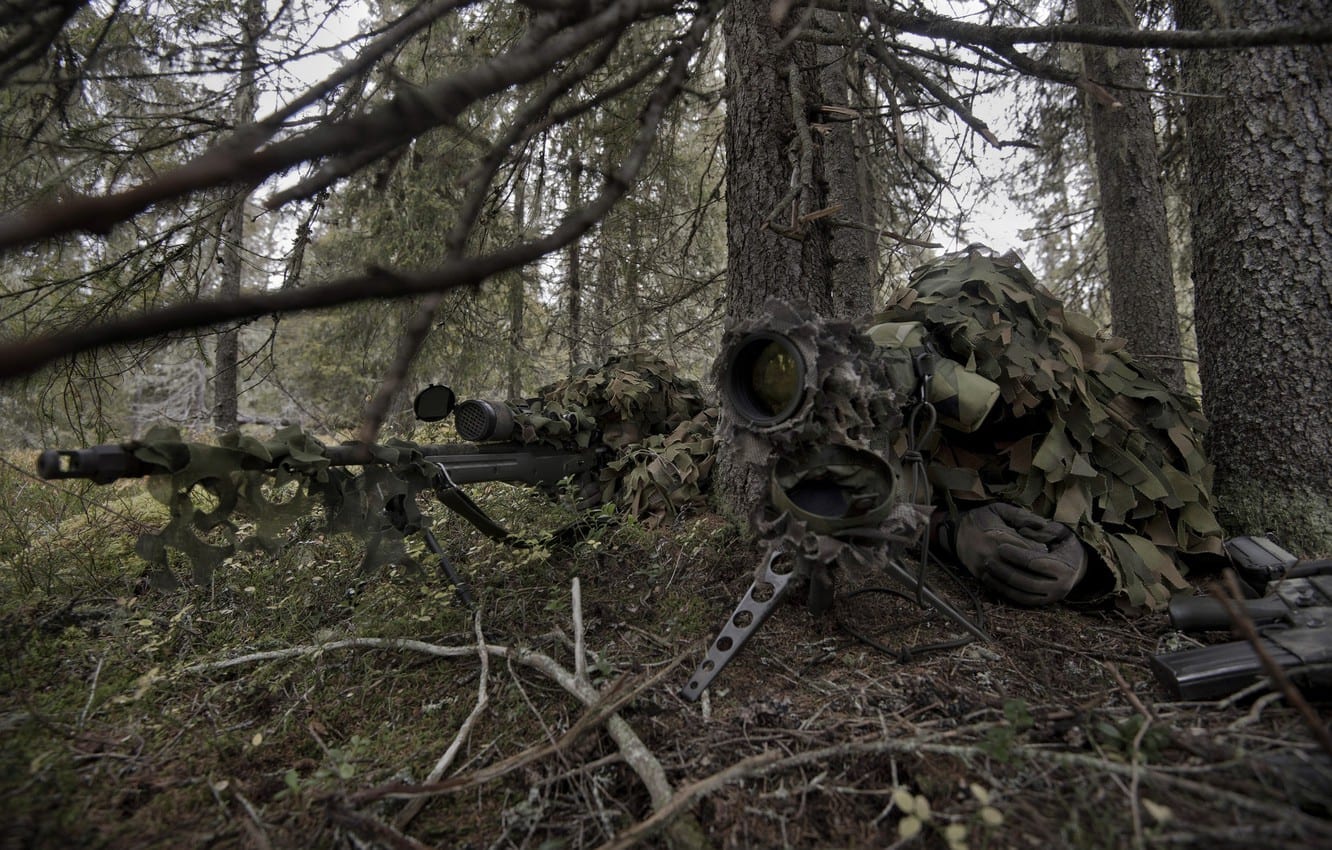 A man lying on a hill looking through a rifle scope

Author’s note: Following the Neil Gaiman Master Class series, he offers the following exercise. Take one of the simple settings below and write a page about it, trying to undermine the reader’s expectations. For example, you’re writing about a man at a party who is talking to a beautiful woman. What he wants is probably obvious. Try to […]

The sun beat down relentlessly on the hilltop, this was not the desert, but even England can occasionally throw a scorching tantrum of a day at its residents. The small corpses of trees on the hilltop offered little in the way of shade and more in the way of a home for seemingly millions of biting insects that perpetually seemed to attack the prone form lying there. From a distance, he looked like nothing more than another browning bush amongst the trees. It would take a seasoned expert in the woods and a very close range to pick out the inconsistencies that marked his presence. He would appear if one saw his face as hardened to the sun as to the hardships that swarmed around him.

A rifle was laid out before him, the long barrel covered and intertwined with underbrush, it’s matt finish doesn’t allow the sunlight to reflect off into the distance and dark draped fabric hid the lens for the same reason. Despite the stifling conditions, the bugs and distractions. The man has his eyes locked on the tiny scope gently adjusting his position in incremental tiny movements his deep steady breathing was relaxed as if he were dozing on a beach in Bali.

On the other end of the lens, the young boy playing in the garden appeared as the complete opposite to the hard lines of the craggy onlooker. He beamed a beatific smile while running around the garden in ever-increasing circles, at this range any sound is impossible, yet the man can see the mouth opening and closing, a one-sided rapid-fire diatribe from the boy at his mother lying nearby on the recliner. He holds out his arms like a plane and seems to glide across the garden like a fighter jet across a green lawn sky.

The steady breath hitches a fraction. The rifleman’s concentration falters at the image before him, his steady movements jerk. But he brings his focus back, forces his breathing to return to its steady cadence. Tracking the boy, back and forth, back and forth across the lawn. He’s never felt conflicted about the missions he’s been on, the things he’s been asked to do but lying here, staring at this child he feels a cold knot forming in his guts. What if they were wrong, what if this wasn’t the time or the place. The sweat trickling down his face made him blink furiously for a moment. He slowly brought down the fabric bandana cinching it over his eye ensuring that no more perspiration could distract him. Sloppy, he chastises himself. His eyes flick to the digital readout in the soil near him. Only 20 seconds remaining until death.

The child has stopped running and is now lying on the grass alternately making angel wings in the grass and reaching his hand out to the clouds as if he could grasp them from the sky. The rifleman listens attentively to the AI spotter in his ear, his entire mind and body completely focussed. His hands smoothly guide the rifle up and to the left, counting down to 11 he expels his breath slowly and at the exact moment of emptiness gently squeezes the trigger. The rifle coughs, the projectile rocketing out from the magnetically charged rails at a specially calibrated speed so that it doesn’t set the air on fire by its passage.

The scope snaps back immediately to the boy who remains in place, lying on his back considering the clouds, but now the scene has started to change, the smile slowly fades and a confused started to erase his smile. His face twitching, eyes blinking. A look of startled pain crossing across his face. The rifleman holds his breath tension locking his body in place, waiting to see if he has succeeded or failed. The boy starts to convulse, arms and legs starting to thrash. The countdown in the man’s head drops down lower 5, 4, 3…

The projectile slices through the distance shedding its ablative layers, the advanced materials inside using its adaptive surface to produce rudimentary aerofoils micro-adjusting to the target. The house, garden and child approach at an unimaginable speed. At a distance of fewer than 10 meters, the projectile’s internal mechanism activates unwrapping its outer skin like a flower slowing the whole thing down exponentially before allowing the more delicate internals of the device to be exposed to the air. The petals are angled so that the force of air rotates the device into a perfectly aimed corkscrew motion before plunging itself through the boy’s skin and delivering its internal payload into his bloodstream.

The boy’s convulsing slows, the man notes the splash of red appears on the right upper thigh and feels his chest tightening from lack of breath. He waits, hands gripping the rifle stock until metal creaks. Then the boy’s mouth opens in silent wail unheard by the man but his breath explodes out at the same moment. The sobbing child runs, limping to his mother, the conversation can’t be heard no more than the dead bee that the child had been lying on could be seen from here. But that was irrelevant. He checked the timer -8 seconds from death time.

He takes his time to ensure that the mission has succeeded and sent a single message via his implant. “Adrenaline delivered on schedule, target alive, awaiting new instructions.”